Ski touring is a type of skiing that takes place in unmarked and uncontrolled areas, outside of groomed ski slopes. It is a physically demanding form of skiing, but also a great way to explore remote mountain areas with genuine contact of nature.

Lifetrek Travel Agency organizes ski tours in Europe, South America and Asia. Our advantages are: ski touring in small groups, many years of experience, knowledge of the terrain and conditions, the best local guidance, individual approach, flexibility and research spirit. This winter we invite you to an unforgettable ski tour in the best company.

Ski touring is skiing outside groomed ski slopes and in principle takes place in unprotected areas. Abroad, two terms “ski touring” and “backcounty skiing” are used (especially in the US). Ski touring presents greater challenges and is also physically more demanding than classic skiing, but it offers a unique contact with nature and the possibility of discovering remote mountain areas.

Instead of chairlifts, cable cars and gondolas, we go skiing on our own. During the ascent, we use our skins, a piece of fabric that is placed on the ski and prevents slipping. However, on the descent the skin is removed. Depending on the conditions and terrain, crampons are sometimes needed for the ascent, in which case touring skis are worn on the back.

The English language best describes the importance of ski touring – ski touring is more about uphill, which would mean that this activity is more about ascent, away from the crowds and with unique views. After the ascent, we are rewarded with a descent on impassable terrain.

Ski touring can be a daily activity, but you can also go on a multi-day adventure. Multi-day ski touring includes overnight stays in mountain huts, or even tents. However, the most difficult but most rewarding form is the t.i. hut skiing.

Ski touring should be as easy as possible, because the weight is known on a longer ascent, and every kilogram is extra on the descent. But light skis are generally quite useless on hard scratched surfaces. With advanced technology and materials, this problem can be solved to a large extent, and this is where the difference in quality between individual models and brands becomes apparent. A mandatory addition to modern touring skis is the rocker, which increases the buoyancy of the ski and makes it easier to make turns. Touring armor should also be lighter than usual, it should allow more back and forth movement. There is also a rubber on the sole like on hiking boots.

The biggest difference is in the ties. Touring bindings allow walking upwards, so that the heel releases and rises and then fixes again when descending. An important part of the bond are crampons, which allows you to walk on a hard surface. An indispensable part of the equipment are touring skins (also called dogs), which prevent the skis from slipping down. Without them, climbing is virtually impossible.

This is equipment that protects us from landslides or before their consequences. An airbag is integrated in the backpack. We activate it when we are caught in an avalanche and two air balloons keep us on the surface of the avalanche. The classic avalanche trio (beacon, probe and shovel) helps to detect the backfill. The avalanche beacon makes it possible to find the location of the victim under the landslide. To define the position of the buried person even more precisely with a probe, and to dig it out with a shovel.

We advise specialist mountaineering insurance for ski touring. Tourist insurance covers only travel and skiing on groomed ski slopes or you are insured up to a height of 3000 m. PZS card or with membership in PZS you are also accidentally insured in the mountains up to a height of 6500 m. The insurance is also suitable for the needs of touring skiing. You can read more about insurance here.

For truly carefree ski touring, we recommend insurance via the Alpenverein. More about Alpenverein

When it comes to the dangers of touring skiing, landslides come first. However, the touring skier more often than with an avalanche. 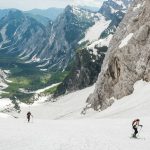 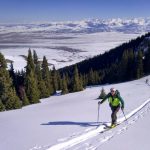 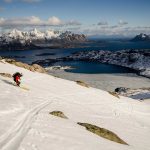